Eight is my number 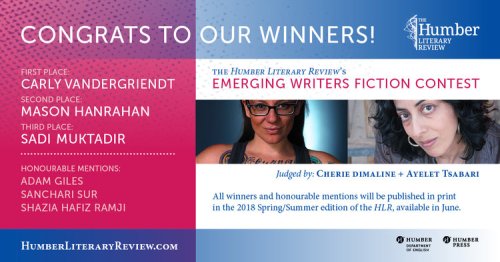 Early in 2017, an astrologer told me that 2018 would be my year. While 2017 would be filled with extraordinary luck (which it was), 2018 would be the year I would begin to reap the fruits of my labour, so to speak.

I laughed at the irony of this previous pronouncement as come day two of 2018, everything started going to shit. I had to leave Mumbai – and my partner – in the midst of a bandh situation (with a potential situation for riots). I had to also leave behind almost all of my belongings, and considered myself lucky to be able to catch the flight to Toronto (via Delhi). In Delhi, my flight was cancelled due to weather conditions (read: fog). There were other things too, like the overall shittiness of Air Canada for not rescheduling my flight without charging me an arm and a leg. It didn’t matter what the ground conditions were in Mumbai at the time, I had to catch the flight, or lose my money.

The memory doesn’t make me bristle anymore. But the tone of the new year seemed to say: you are fucked, my friend.

Oh, and I also got the dreaded viral flu, with a cough that nested in my chest for a month.

So, as I approached the 8 year anniversary of my writing blog, I did so with trepidation. This has been a prolific year so far, in terms of writing (I try and write creatively every weekend now). I had atleast ten things in the Submittable queue. The most I have ever had in my entire life! Two rejections came by. Then, an acceptance (of a poem) in a magazine I had been trying to break into for years. But no fiction; nothing fiction yet. I began to wonder about my credentials as a writer. Maybe, my writing was just not good enough. (I want to add here that these are self-destructive thoughts that many writers have in personal low moments, and indicates nothing of the writing itself).

Three days before the anniversary day hit, I got an email. One of my queer short stories had made it into the Honourable Mentions list in a fiction contest.

“Toklas to your Stein” (which in retrospect is a pretentious short story name) was the first story I wrote this year. It came to me in fragments. It came to me in bursts of frustration. It came to me and didn’t reveal its purpose till the very end. It also took me a whole month to write. Weeks of agonizing over a story that seemed to make absolutely no sense to me. The sections were haphazard, at best. At worst, it was an experiment in what I thought to be avant garde.

I wanted to submit a story for a contest, and I submitted this one (it’s all I had at the time of the deadline). The judges were none other than the esteemed Cherie Dimaline and Ayelet Tsabari. I felt a little ashamed because it was a story I didn’t really believe in. The style seemed off, and unlike anything I had ever written. And then I indulged in a terrible habit that I have: continued editing even after submission, all the while berating myself for submitting what I considered to be a “lesser” version.

When the contest version actually made it to the honorable mentions list, I was a bit shocked. I expected a rejection. Really, that would have been okay. The email that morning from Humber Literary Review made me feel numb. I wondered in my half asleep state if I was still dreaming. And, because I wanted so very badly to be seen (as a writer of fiction), this was the logical conclusion of my nightmares.

Imposter syndrome is real. It is far more real when you are a queer woman of colour writer, without the backing of an MFA, struggling to make sense of the worlds in your head, and the worlds you manage to put down on paper. And because the world of writing is so tiny, there is constant pressure of wanting to be seen, and not being seen, while everyone else seems to be far more visible.

Sometimes, what this writer needs is a boost. An acknowledgement. A head nod of sorts. It doesn’t matter where she stands at the moment, and how much she has achieved, it never seems to be enough (because on most days, it isn’t). On most days, she is invisible any way. On most days, the world is a shit hole, and she is just trying to exist. But there are days when she wants to be seen.

There are days when I do.

Canisia Lubrin once told me contests are not measures of success. I know. I agree. Same goes for publications, or even visibility in general. Most times, it’s really about who you know, and how much cultural capital that person holds, and how much of that capital they are willing to share with you.

I am grateful however to Cherie Dimaline and Ayelet Tsabari – writers I admire and haven’t yet had the good fortune to talk to in person – for seeing something in my story. 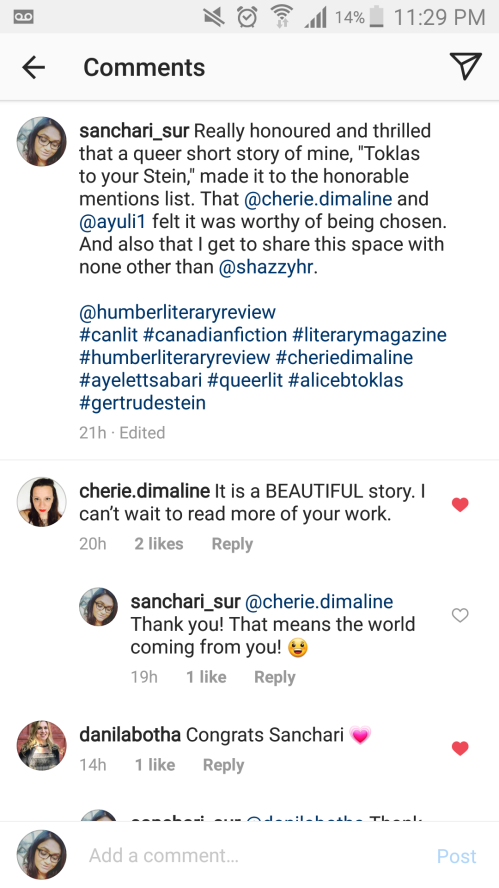 Happy 8 years to the blog! My story, “Toklas to your Stein,” along with five other stories from Humber Literary Review’s Emerging Writers Fiction contest (winners and other honorable mentions) will be in the June (print) issue of the magazine.

UPDATE April 29th 2018: I received a Lambda Literary Fellowship in Fiction this year. It will allow me to work on my fiction manuscript with Chinelo Okparanta in LA this August. Eight must really be my number!

Filed under fiction, Writing about writing