The Chapbook that never was

Chapbooks are not easy to make.

And, my final project for Carolyn Smart’s poetry workshop class was just that. A chapbook.

I knew what I wanted. My barenaked face, sans makeup (except mascara), as the cover.

The title would be “For Sale” borrowed from the first line of the first poem.

And, it would be fancy, a 4X6 in hardcover, bound in red cloth.

Hah. Impossible. For a 12 page chapbook, it was très impossible.

For the photo, I hunted down the fantastic Chloe Sobel from my creative writing class last term. Her expertise lay in feminist retellings of fairytales. And, portraiture.

After scheduling and rescheduling, we managed to meet outside in the windy cold (there was snow on the ground, and her reflector almost flew away, twice), get my clothes partially off for the barenaked feel, and clicked a few for my cover.

I begged my fantastic sister to help out with her artsy skills, and although she tried, due to time crunch (on my part), it was just not what I had pictured in my head.

So, I visited the printing services on campus with my ideas. They shot it down. We don’t do the kind of binding you want, they said. It just cannot be done.

I went to Staples next, but with similar results.

And just when I thought all was lost, and I would probably have to print those pages out myself, and staple them together in a shoddy manner (sewing and glue guns were out of question. Mostly, due to lack of a single artistic bone in my body.), I thought why not. Let me see if there are any binding services in Kingston.

The nearest to my location was DigiGraphics, and so I called them. The kind Elizabeth Clark there suggested, very gently, that perhaps I should reconsider the binding. Saddle binding could work you know, she said. It wouldn’t be fancy, but we could work with it. 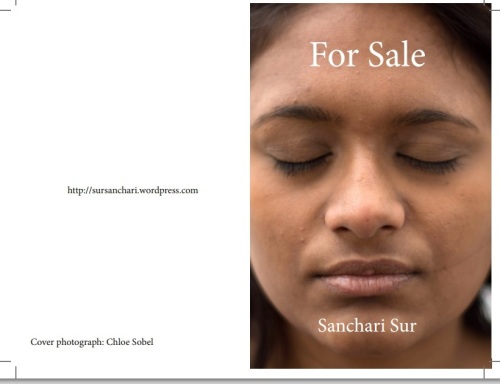 And voila. I had my chapbook.

It was slightly different from what I had initially imagined. But it was a real thing.

And, it was all mine.

The chapbook contains seven of my poems (four of which have been workshopped in the poetry class and some of which have been published online) and only exists as a single copy. It was, as I mentioned, made only for the purpose of my final creative writing project. At the moment, I do not have any plans of having any more copies published.